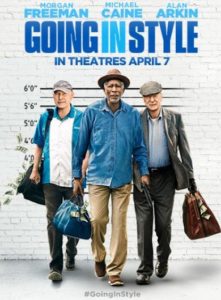 Though we often think of Zach Braff for his role in Scrubs, one of his most notable roles was a writer, director, and star of 2004’s Garden State. This time he helms the action comedy, Going in Style, written by Theodore Melfi (Hidden Figures), a re-imagining of Martin Brest’s 1979 film of the same name. The 1979 version was a darker version, starring  George Burns, Art Carney, and Lee Strasberg.

Ordinarily, I would say trying to remake a movie with the cast name of the former movie, would be a steep hill to climb. Fortunately, for this rendition, the services of three modern legends of the older persuasion were employed. Joe (Michael Cain) plays an elderly gentleman, whose daughter and grandchild live with him in his home after a divorce. He, Willie (Morgan Freeman), and Albert (Allan Arkin) worked for years at a plant who moves to Vietnam and cuts off their pensions. While conducting unsatisfactory business at his local bank, Joe witnesses a robbery where three masked individuals waltz in and steal 1.6M dollars.  This puts the idea of a heist in Joe’s head.

After some convincing, the other two friends agree to take part. All of them are penniless and with the loss of their pensions, life looks grim. Together they set out to fool everyone with the help of a shady coach. There is a lot of physical comedy and jokes related to growing old throughout. You can’t help but root for these guys to overcome the odds.

Going in Style is pretty straightforward. There are not a lot of concepts we haven’t seen done before, including the jokes. One of the funniest small parts in the movie is played by Christopher Lloyd. He appears to be a leader in their local social club, but he exhibits a high dose of craziness and adds strength to the comedy relief.

With these men close or above 80 years of age, we may not have many more opportunities to see them on the big screen.  This isn’t a bad one to check out, if for just that alone.