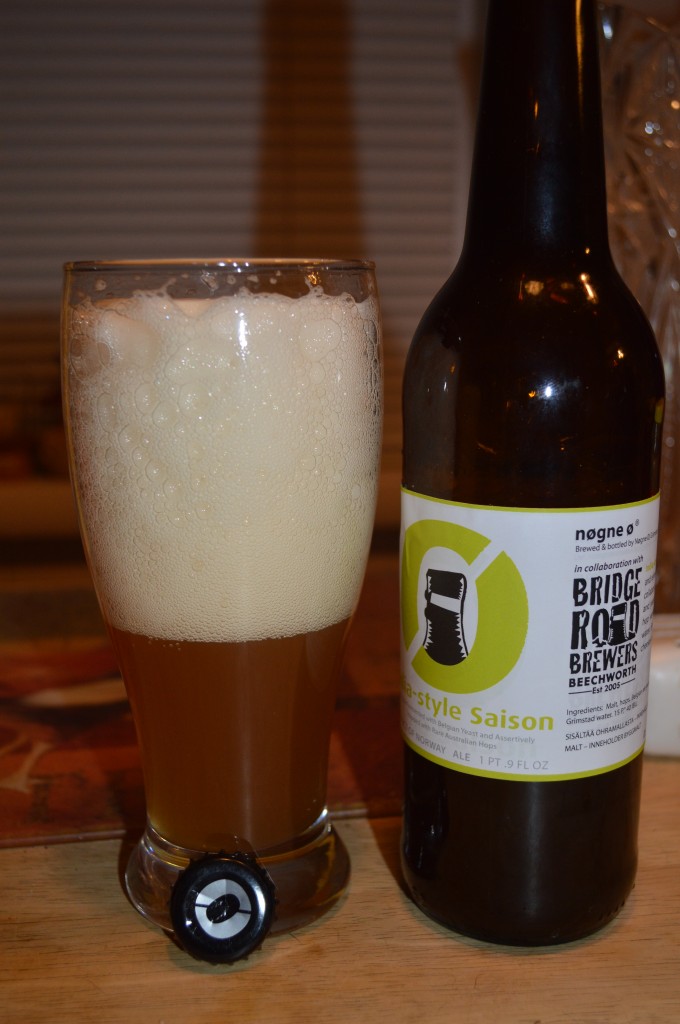 I’ll admit that I picked this one up based on the fact it was Nogne O and had the word saison on it.   Nogne O is a small brewery in Norway that I became familiar with during Philadelphia Beer Week.  I had several varieties at a wonderful little bar, the Farmers Cabinet.  This however is not a pure Nogne O play, but a collaboration with Bridge Road Brewers out of Australia founded in 2005.  The other item that seemed a bit odd was that it was called India-style Saison.  This lived up to the oddness in the mixing of styles.

As you can see from the photo it pours out with a vigorous head.  The first pour was nearly a foam over as it came out with such intensity it caught me off guard.  I really only had 2 inches of bear and 6 inches of foam in the beginning.  The lacing and head retention was consistent throughout the experience.  I also was careful on repours as each nearly came out of the glass.

The color was a very cloudy honey and the scent was pretty consistent with the saison/farmhouse varietal.  The taste started out with your typical wheat saison fruitiness featuring apricot and belgian yeast funkiness.  This fruity/funky blast is almost immediately supplanted by a grapefruit style IPA bitter blast.  It sort of caught me off guard and kinds of underscores what styles are all about.  Somehow this combination clashed a bit out of the gate.  It did improve as the beer warmed, however I do not think this will become a new style.  This is also a beer that is a one and done in terms of production.  I recommend trying one if you get a chance because I feel there is such a clear distinction in the styles that were combined to mixed results.