If you want to get a bead on the Oscars this year, you will want to check out Manchester By the Sea, opening November 18th in US theaters. Ever since it’s debut at Sundance this year, there has been a lot of buzz for Lonergan, Affleck, and Williams as likely nominees, with good cause.

Lee Chandler (Casey Affleck) performs the duties of a janitor/handyman for an apartment building in Boston during the day and drinks and picks fights at night. His muted personality screams with the mysterious pain that fuels his disconnected and taciturn demeanor. When his brother dies from a heart attack, Lee has to return home to make arrangements for the estate and burial, as well as, see to the welfare of his sixteen-year-old nephew, Patrick (Lucas Hedges).

The story reveals itself through a series of flashbacks, exposing the unfortunate demise of both of the brother’s marriages. Lee has to face his past and even come to terms with his ex-wife, Randi (Michelle Williams), in a gut-wrenching scene of loss and anguish. 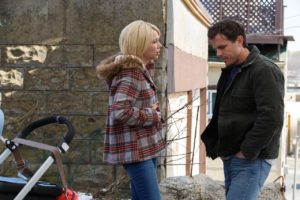 Lee also has to address his brother’s wish that he become the guardian of Patrick and assume the responsibilities of the household. Despite his own tragic grief, Lee has to provide support to his nephew, who is rightly grief stricken and rudderless.  Lee has to do this while not wanting to stay in the town that is the nexus of so many personal demons.

Tonally, the movie maintains consistency.  Outbursts of emotion and epilogues explaining motive are not present.  Both Lee and Patrick show emotion through recalcitrance and not open dialogue as a vehicle to narrative development.

Manchester by the Sea delivers a haunting echo of loss and misfortune.  It does so with a detachment that has profound parallels to the observance of life going on for some while others have to pick up the pieces of what was lost. Words often go unspoken for events that shape the character of a person.