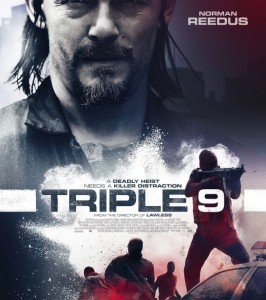 If you like dirty cop movies and complex storylines, Triple 9 is going to be your movie.  John Hillcoat directs this feature, otherwise known for movies such The Road(2009), Lawless (2012), and the Proposition (2005).  With that resume, it is no wonder he was chosen for this dark, gritty movie.

Kate Winslet plays an almost unrecognizable role in this film.  In fact, I did not know she was in it, or realize, until a post-movie conversation, that she was the evil Russian Jew, Irina Vlaslov, and the main antagonist in the movie.  Irina enlists the father, Michael (Chiwetel Ejiofor), of her sister’s baby (her sister is played by Gal Gadot), to pull off a heist with his crew, made up of cops and former special forces members.  It is implied that Michael only gets to see his son as a consequence of agreeing to aid Irina.  Irina’s ultimate aim is to secure certain items that would free her husband from prison back in Israel. This is not the least of the convoluted plot, honestly, but I think I hit on some of the high points. 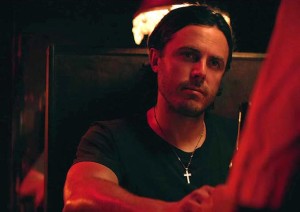 The crew pulls off one excellent stunt filled heist as the movie opens only to be blackmailed into performing another before they will be paid any money.  The movie does not develop this well and you have to piece it together from snippets of conversation.   The moviegoer that does not pay a lot of attention will get lost in the narrative.

To pull off this additional gambit, the thieves decide they will need to execute a 999, officer down.  Chris Allen (Casey Affleck), is the new partner on the force for one of the crew and is marked to be the cop that is taken out for the heist.  Jeffrey Allen (Woody Harrelson) is Chris’s uncle and a Sergeant Detective.  Harrelson does a great job, as usual, as a gritty, verging on dirty, cop.

This is a movie with excellent actors and a mottled plot that fizzles a bit towards the end.  It doesn’t stand up to extended scrutiny if you start to try to dissect motives for events on the screen.  It is a fun film as long as you don’t think too much.
C+