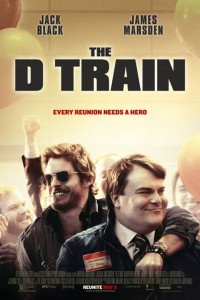 The D Train is a movie that, in the end, I have to give the thumbs up.  Yes, I was nonplussed by a synopsis that describes a loser reunion committee chair (Dan Landsman, Jack Black), who sees a commercial for a Banana Boat Suntan Lotion ad and an old classmate (Oliver Lawless, James Marsden) as the spokesperson and thinks that he can make noncommittal classmates sign up for their 20 year reunion because he convinces Oliver to attend. But, this movie has a huge turn and commits to a premise that is hilarious in its absurdity and challenges social prejudices in a way that is direct and sharp. 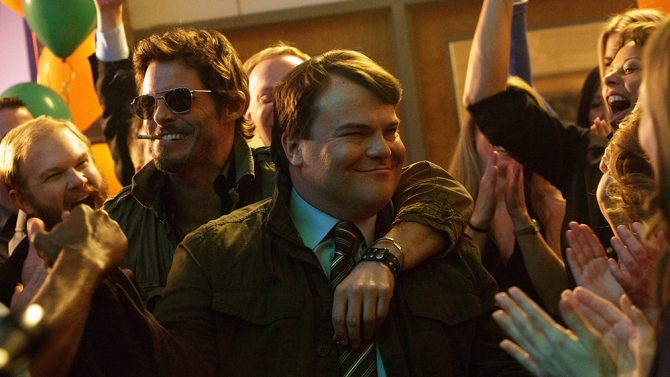 And there is absurdity a plenty!  Dan has lived all his life in Pittsburgh with his wife (Stacey, Kathryn Hahn).  They have two kids, and seemingly, live a mundane life.  Early in the movie, we see Dan trying to get former classmates to go to their twenty year reunion to little success.  Dan is further put upon by his fellow committee members who lie to him about going out to party after a night of calling former classmates.  He is a loser in his current status and his complete obsession is to be a hero to his classmates by bringing Oliver Lawless, the guy that left Pittsburgh to chase his dreams successfully, to the reunion.  He dupes his boss (Bill Shurmur, Jeffrey Tambor) into thinking they have huge potential contract in Los Angeles and gets him to sponsor a company paid expense trip there, whose ultimate purpose is to get Oliver to go to the reunion. 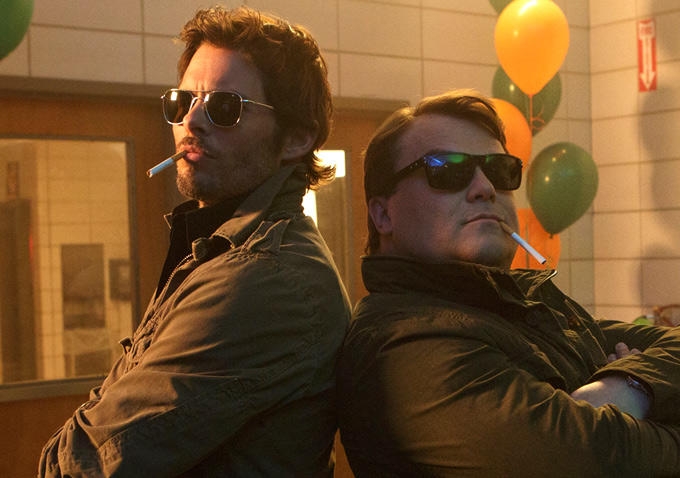 This is the essence of the first act that ends with a twist that I personally did not see coming and is edgy and risky in a way that makes you laugh profoundly.  From here the movie wavers, at times weakly in the aftermath of the trip, that culminates in a third act that left me sort of giggling with its tie up of the premise.

I will not kid you.  This is a comedy that earned an R rating deservedly, and frankly, may be a movie that offends a lot of people.  To me, the best comedy plays in these extremes and I applaud the risk taking if nothing else for its social relevance.