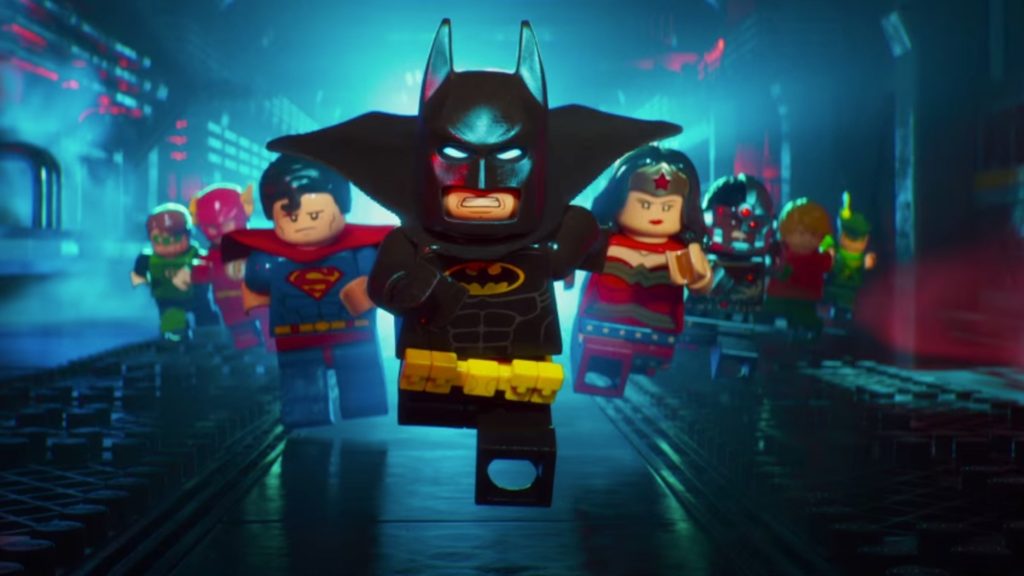 Warner Brothers throw everything but the kitchen sink at you in this frenetic tongue in cheek take on Batman set in the Lego universe. Batman is arguably the most successful superhero franchise of all time, having inspired generations from its comic book franchise to early TV and movie incarnation with Adam West, to its turn in the late 80’s and 90’s that was the precursor for the coming age of superheroes and big budget movies,  which unfortunately, crumbled under poor scripts and bat nipples (why, dear god why?).  Ten years later, Bats took on a much darker form in the Dark Knight trilogy based on a much darker series of comics which earned Heath Ledger a Best Supporting Actor Oscar posthumously for his iconic portrayal of The Joker. Most recently, Batman put on a metal suit and armed with kryptonite, fought Superman in epic fashion.  Clearly, we have gotten pretty serious with our Batman stories.

I haven’t even touched upon his many animated portrayals, one of which is at the heart of this review. In 2014, Batman made a cameo in the much lauded The Lego Movie, and his light take on the grim character was a standout. It was no surprise he got his own turn in Legoland.

Fortunately, this is not an origins movie. We meet Bruce Wayne in full force as the Dark Knight. The movie also wastes no time introducing the villain, Joker. As Batman thwarts his immediate plans to destroy the city, he hurts the Joker’s feelings by telling him he does not need him. This sets up the tension point for the entire film and Batman’s underlying story arc. By day, our over confident jerk persona Batman fights baddies, makes appearances at orphanages to shoot at kids with merch cannons, and then goes home to microwave lobster and watch Jerry Maguire. He doesn’t even seem to want to remove his mask unless prompted. This Batman’s dark brooding manifests itself in narcissistic self-promotion and a lack of self-awareness.

Will Arnett reprises his role as the voice of Batman with adequate depth. In general, the voicing choices stayed on the light side.  I found Michael Cera’s Joker to be a disappointment. Interestingly enough, the animated version has most notably been portrayed by Mark Hamill in other renditions.

The Lego Batman is loaded with color sounds and a plethora of references to Batman history.  Tailor-made for the selling of kids toys, this movie lacks the connection to the real world that worked so well in the first movie. Tieing the imagination portrayed on the screen to the world constructing kid behind the magic was sorely lacking. For this reason alone, and despite the geekdom latent in the overloaded references, it fell short for me. (It’s still a great movie for the kiddos, oh, and it was probably meant for them so I will shut up)