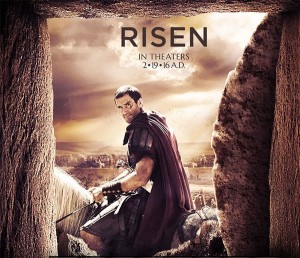 You might say that this story was told from my point of view.  Risen tells the story of the crucifixion of Jesus Christ from the viewpoint a non-believing Roman tribune, Clavius (Joseph Fiennes). Right off the bat, I will say that the movie was well done.  I would not claim to know all the nuances of the Bible version of the story, but I think they got across the message they intended in an effective fashion. That is the best part and worst part of this movie wrapped into one.

We join the story with a short fight scene, in which, Clauvius puts down a band of heretic Jews in brutal fashion. The scene draws upon the history of the Roman formations in squad form, as they subdue the insurgents, and not, the vast Legions of movies such as Gladiator. Clauvius is all too quickly summoned to the Roman Prefect, Pontius Pilate, to handle a situation with a Jew that has claimed to be the King of the Jews in mid-crucifixion. Clauvius arrives with Jesus and two others on the cross. The scene of their deaths is depicted with a significantly less gruesome overtone than most other movies that depict the event. This isn’t about the crucifixion, however. This is about the conversion of Clauvius and the miraculous events after the resurrection. 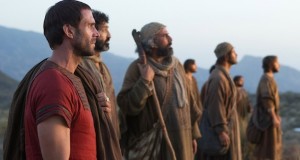 And to that end, they show that Clauvius is basically a man who wants peace. He fights and does what he must as a construct of the world in which he lives. He exhibits mercy in his handling of Jesus on the cross in front of his mother and allowing the father to prepare the body for entombment as prescribed by their faith. Pontius entrusts Clauvius with the guarding of Jesus body in its tomb past the 3 day period in which Jesus has promised to rise from the dead.  He does so because Caesar is visiting soon and he does not want the distraction of a martyr risen to detract from the Prefects rule. I question whether the nuance of a martyr and his significance would have been understood in these times, however, it is a story point. 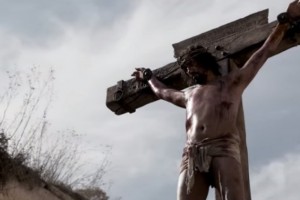 From this point on the story relies very little on the narrative, thus developed, and focuses on delivering more biblical aspects of canon with full parable style. There is very little in the way of dialogue from the King of Kings. His actions and the miracles he performs, say it all.

I know that this movie is supposed to show how someone who is not of the faith became faithful. It also shows how Jesus performed miracles and how Jews, themselves, conspired against their own. Perhaps unintentionally, it also shows how even someone watching the events, needed the manifestation of God himself to believe the miraculous nature of events. It almost mysteriously and conveniently says that no one else other than this lucky former Roman soldier and the 11 faithful would ever get to see the same.
B-