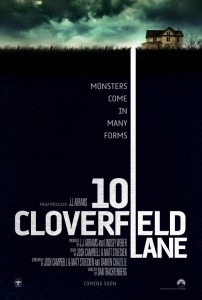 Okay, I’ll be honest.  I detest shaky camera and found footage.  I won’t even watch it.  Even if there is a reportedly good story, I won’t stand in line to go see it. For this reason, I never saw Cloverfield.  I know it was deemed a fantastic movie, or at least, one that had very solid marketing.  I also have the vague impression it was a shaky cam, found footage, war, of the world-esque film with a generic monster payoff.  However, despite its predecessor, 10 Cloverfield Lane, had me interested.  The trailer showed John Goodman in a creepy, though, undefined role, which did not show one element of shake. 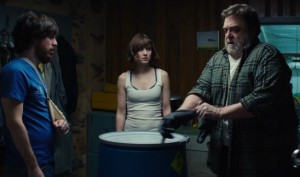 This is Dan Trachtenberg’s first directorial role.  JJ Abrams produced the movie and has said that it is not a sequel to the original but could be considered a “blood relative”.  The movie is actually an adaptation of another script titled, “The Cellar”, and as you watch it, you can see the potentially disjointed pieces.

The movie opens with Michelle (Mary Elizabeth Winstead) avoiding talking to her boyfriend, as he repeatedly calls her, while she is in her car in flight from him. She suddenly has a car crash and in the next scene, she wakes, knee-cuffed in a basement with an IV.  Howard (John Goodman) tells her that she is lucky to be alive and that there is no one to call.  There has been an attack and they need to stay underground because there is toxic gas in the atmosphere that has killed off everyone else.

The entire cast is wrapped around three people in a basement for the majority of the movie, so it has to rely on the character strength of the cast and the writing to merit accolades.  John Goodman shines, as we have come to expect.  And really, without spoiling things, I can’t tell you much more than that.  Most of the movie is made up of anticipated action and uncertain motives delivered in a highly character driven environment. 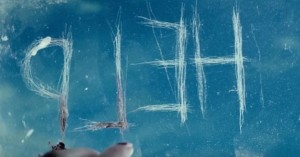 The takeaway from this movie is that there could be a legitimate sequel that could have a completely different narrative and frankly genre than the original.

This is a confusing piece for me to place and that, in and of itself, garners a fair rating.