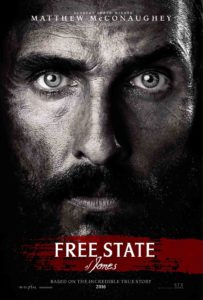 One could not imagine a more curious story in a more curious time than the story of Free State of Jones during the civil war and its aftermath.  Here we basically have the succession of several counties, not from the Union, but from the Confederacy, in the deep southeast of Mississippi during the Civil War. At the center of the tale is the controversial Newton Knight(McConaughey), whose life and legacy are a matter for much heated debate to this day.

Newton Knight begins this tale in the army of the Confederacy as a field nurse.  The opening battle sequence is somewhat typical in its intent at stunning the audience with its visual account of the brutality of war.  I found myself cringing at the the triage tent, where, veritable butchery occurred in an attempt to save the lives of the grievously injured.

When his nephew is forced into the draft and subsequently dies, Newt deserts the army and returns home. He is further incensed by the decree that families that have 20 or more slaves can exempt one man from mandatory conscription and can increase this number for each 20 slaves that they possess.  This brings an immediacy to the story as the statement, “rich man’s war, poor man’s fight,” becomes applicable.  He then deserts the army and begins a campaign against the Confederacy.

The movie can be divided into three parts, the war itself, post war activism by Newt, and the 1948 trial of Davis Knight, about the status of his lineage, which is interspersed in forward flash snippets throughout the feature. The movies intent is to pull all three together and tell a tale of the roots of our modern civil rights movement, and maybe in a more prompt application the other 98% plight. 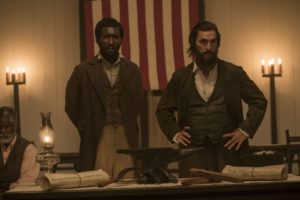 Truth is…Newt had 9 kids by his first wife and 5 by Rachel, they lived in two houses on his estate and he frequented each separately.   The movie made it seem he had one from his first wife and then fell in love with Rachel and had a celibate life with her thereafter. I gathered these items from separate accounts online that show that there is no love lost between his descendants.  There is a black and a white reunion that is not attended by the other party.

Every account at historical fact has a slant that is either unintended or blatant for the movie arcs sake. I can’t help and be critical of any movie that intends to portray history and craft a recreation of events to “make it Hollywood palatable”. There is way too much cohesion between whites and blacks in this movie.  There were moments that made you think that everyone put aside prejudices and realized that they were all fighting against the top 2%. In that part of Mississippi, they might still be fighting the civil war. Clearly Newt was a man before his time in many respects. By the end of his life, he had declared that he was married to Rachel, a black woman, which was illegal in Mississippi far into the 20th century.  Upon his death he also left her 160 acres, which would have made her made one of the biggest landowners in the state, then again he outlived her by many years and had a relationship with her daughter from another father.  Not all of that makes the movie of course. (insert winky emoticon here)  History rewrites itself daily.