Directed by Steve Pink (Hot Tub Time Machine, Accepted, High Fidelity), Hot Tub Time Machine 2 takes places ten years after the first movie with Lou getting into trouble necessitating action.  In an ironic twist, the crew tries to go into the past to save the future which is currently the present, only to land in the future to save the past (which is also the present).  Don’t get too hung up on that because no one in the movie did either.  This is essentially a vehicle for telling a lot of sophomorish jokes. 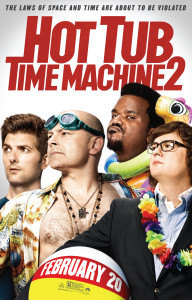 In fact, one could be entirely misled by the preview of this movie which would make it seem like the guys were dancing through time on a pursuit of looping ala Back to the Future.  The movie takes place all in one timeline of what is essentially an alternate reality.  The movie doesn’t even try to fake that this is sci-fi however.  The narrative is designed to give way to the next joke in virtually every instance.

This is not to say that you should expect a lot more from a movie called Hot Tub Time Machine 2.  If you watched the first and were sufficiently entertained…then your bar is low enough to give this second movie a run even absent John Cusack.