Seymour Bernstein has lived a life of music.  From an early age he wanted to play the piano, even before the family had one.  By age 15, he already had students of his own and by 17 he had won the Griffith Artist Award.  His travels in life included a stint in the military during the Korean war where he, among less glamorous duties, played for the troops on the front lines. Post war, he played in concert halls around the world.  As a renowned concert pianist, Seymour decided to retire from performance in 1977 at age 50, and devoted himself full-time to teaching.  This context and a chance meeting with Ethan Hawke led to the study of a man and his love for music in Seymour: an Introduction. 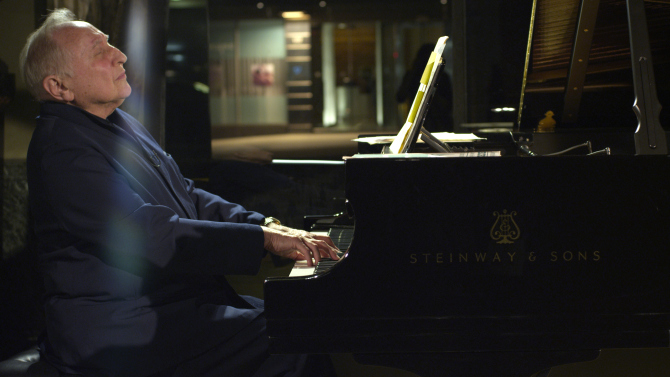 “When I was around the age of 15, I remember that I became aware that when my practicing went well, everything else in life seemed to be harmonized by that. When my practicing didn’t go well, I was out of sorts with people, with my parents. So I concluded that the real essence of who we are resides in our talent, in whatever talent and there is.”

This movie is not your standard biography.  It does not start with a picture of a little house and a monologue about the circumstances of Seymour’s upbringing.  It begins with a shot of him today in a tiny apartment in Manhattan, where it is said he has lived for 50 years.  Beyond his own recounting of certain aspects of his life through anecdote you see little of the man who lies behind his music.  In his story telling, you immediately see what Ethan Hawke saw in him.  Quietly self-possessed, the man holds court through a casual delivery and pleasant demeanor that seems to ooze of wisdom.

You can almost hear a gentle counterpoint to the teaching’s of the fictitious Fletcher in the Oscar-winning Whiplash.  He doesn’t teach by way of force and dominance.  He has a gentle, almost grandfatherly, way of addressing his students.  Yet there is further insight one might draw from what motivated him in life that does align him to the world we saw in Whiplash.  He speaks intimately about his decision to step away from concert performance.  The pressure to perform at the highest levels takes a toll on a person and he remembers that he did not want to become neurotic as a result.  At the age of 50 he decided to step away and teach full-time and in that had more joy than he ever did before.  To me there was almost a haunted quality to the man as he remembered the before times.

Seymour was coaxed into playing for an audience by Ethan. The level of his devotion is clear as he says, “I practiced for 8 hours a day for a year prior to this performance.”  Few of us have that kind of fixation on perfection.

And it goes without saying, the music is wonderful.