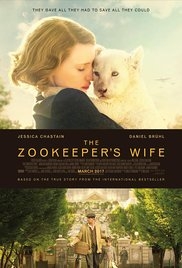 Endless tales of heroic deeds can be told about World War II and the atrocities associated with the holocaust. The Zookeeper’s Wife tells the courageous story of Antonina Zabinski, adapted from a novel (written by Diane Ackerman) based on Antonina’s diaries. The movie, however, is disappointing in several aspects, despite a wealth of riveting material to draw from.

Antonina (Chastain) helps her husband, Jan Zabinski (Heldenbergh), manage the Warsaw Zoo leading up to and through WWII. Time is taken to establish her special connection to the animals with images of her riding a motorbike around the zoo with a young camel running after her and her helping to deliver a baby elephant that was in trouble during birth. The early scenes of beauty and harmony serve as a sharp contrast to the images of exploding bombs, death and invasion forces that soon transpire.

Soon after the occupation of Poland, Lutz Heck (Bruhl) arrives to assume the role of chief zoologist for the Reich. He convinces the Zabinskis to let him take best breeding stock left alive after the bombing back to the zoo to Berlin, he subsequently kills all of the remaining animals, saying there is no food to feed them. It is here that we see the Zabinskis begin to work for the resistance.  They offer to set up a pig farm in the zoo to feed the occupying German troops and Lutz Heck decides to use the zoo for experiments to bring an extinct German species of livestock back to life. Meanwhile, Jan uses his need to get slop for the pigs from the ghetto of Warsaw (enforced Jewish encampment near the zoo) to smuggle Jews away from imprisonment, hiding them in the many tunnels beneath the zoo grounds.

There are obvious tension points with Lutz daily presence at the zoo and the hidden escapees. Antonina plays different tunes on the piano to indicate when the jews should hide and when they can come out. However, the movie glosses over these things. There is no development in any of the struggle for those that are hiding 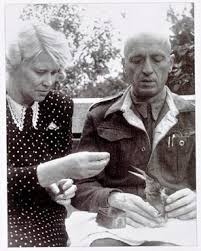 . There is no development in the reason for the resistance. My biggest dislike, however, was the Hollywood inclusion of a fabricated love triangle. Through it, Jan is seen as a jealous husband concerned about his wife paying attention to Lutz advances on her that were carnal in nature. Jan, himself, was a fascinating man, who in real life, was a firm atheist but still had a humanistic need to right the wrongs of those persecuted for their religion, by others of differing faith.

In the end, this is a movie that could have been so much more. Chastain was amazing as always, but the tale told lacked.