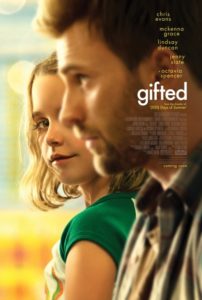 This is Marc Webb’s most recent effort since his big screen Amazing Spiderman days. And like those two movies, I am left with conflicted feelings over what was brought to screen. Don’t get me wrong,  the casting and portrayals are excellent, but, I have some questions about the message and the framing of the dialogue in question.

Chris Evans has become the on-screen personification of the ultimate Boy Scout through his work with Marvel as Captain America. This can be a somewhat limiting career predicament. In his most recent roles, whether in the horrific future dystopian world in Snow Piercer or a nice guy that chooses the high road in Before You Go… Evans characters have stood for justice and “doing the right thing”.  In Gifted, Evans plays Frank Adler, a single man living in rural Florida, raising his niece, Mary (Mckenna Grace). The movie makes it a point to establish Frank as an every man. His house is small and his niece sleeps on a bed that’s in a common area. Frank’s white shirt is dirty because he works on boats to make a living.

At the beginning of the movie, Mary is preparing for her first day of school.  She has been homeschooled up until now and she does not want to go. Frank sees her off to the school bus and receives an admonishment that he should not be sending her to school by his neighbor and friend, Roberta (Octavia Spencer). Mary has a rough first day but she attracts the interest of her teacher, Bonnie (Jenny Slate) because she is a math genius. Before long she is offered a scholarship to a new school that would challenge her math prowess. Frank turns down the offer which then gets the attention of Mary’s grandmother (Frank’s mother) and sets up the legal procedural that dominates the second act.

The movie is well acted and has a story that will keep you engaged. Mckenna Grace’s presence on screen hints at a potentially bright future, even if it is not in Mathematics like her on-screen character. The issue I have with Gifted relates to the message delivered. The movie insinuates that having access to better school conditions is a negative thing. Of course, the movie frames the story in such an extreme way, you would tend to agree with the premise. The resolution of the story is less high-minded than it is derivative. The early frustration Mary shows in class is a real outcome of being in an environment that is less than challenging. Kids also do not automatically associate with the smart kids, being smart is generally not the thing that makes you the cool kid.

Decent movie, even if I don’t agree with the framing of the message.