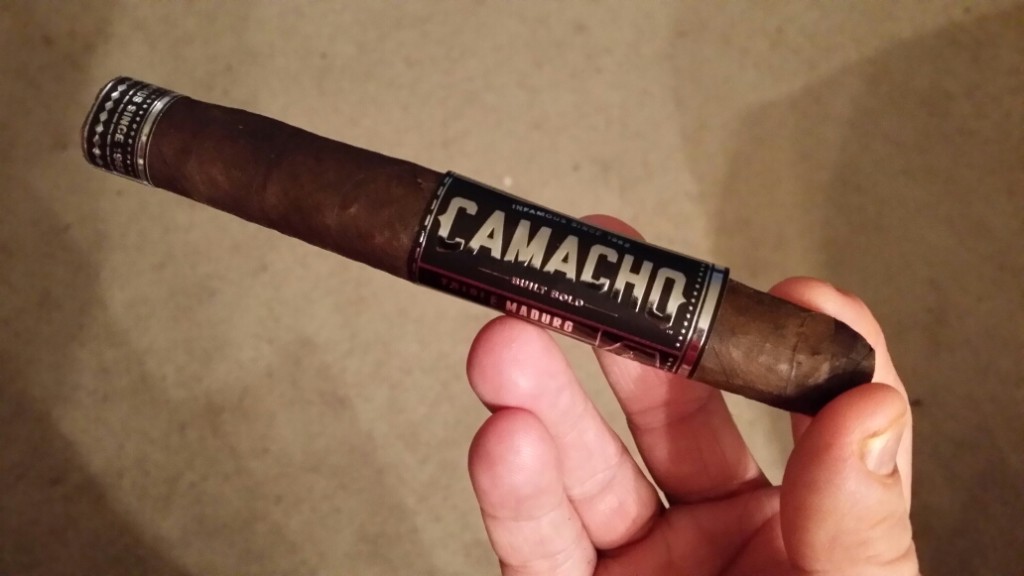 Introduction : Okay, it is late evening after a long late spring day. The rain clouds have passed through and I have decided to sit down to my first official cigar review.  I have smoked cigars off and on over the last ten years or so, and most often have done so on a golf course somewhere. I don’t play golf much anymore but have wanted to add this passion to my list of things I review.

Tonight’s cigar is one that I have enjoyed enough in the past to buy a full box.  Camacho’s triple maduro is touted as the first cigar to be constructed entirely of Maduro (heavily cured) tobacco leaf. That’s right, rich maduro flavor in the binder, filler, and wrapper.

Construction (out of 10): The wrapper is dark and mostly uniform with some lighter and darker spots, but not overly so. As expected from maduro makeup, the cigar has pretty lumpy shape. Maduro does not lend itself to ease of construction on this type of cigar. There are a lot of veins and it is slightly oily to the touch.

Draw (out of 15): This cigar had zero problems on the draw throughout the session.

Burn (out of 15): Well this is an area I did not expect great performance. Maduro is a bit tricky to keep lit in general, and with the binder, filler, and wrapper all the material one could expect some inconsistency.  It lit very well but perhaps because I did not pay as close attention as i should have it went out. I relit and had some inconsistency in the burn which you can see in the photos.  It aided in the ash retention but eventually i touched it up. I can’t really kill this cigar for being a funny burn but if you don’t like cigars you have to retouch then this is not the one for you.

Ash (out of 5): As mentioned in the burn rating, the ash became very long. I am gentle handling the cigar so I tend to get long ash.  You can see it burned a little funny at first and then became lighter as you like cigar ash to look.  In the end it made it almost halfway with a little aid from a wonky burn.

Smoke (out of 5): The smoke was pretty prolific.  I smoke a lot of pipes and I have found few cigars that smell “”good”” in an aromatic sense. With all the maduro tobacco you have some deep strong scent.

Taste and Impression (out of 50): This is a pretty rich tobacco. There is a lot of chocolate flavor. I didn’t feel like it was overpowering, however.  It remained consistent throughout the smoke.  It did offer some need for touch-ups and the wrapper burned a little strange on one side. This was easily corrected however. It began to get stronger in the last third and the third with a bit of pepper flavor added into the mix. I finished it at about a 5th to go. Overall it was a pleasurable experience. 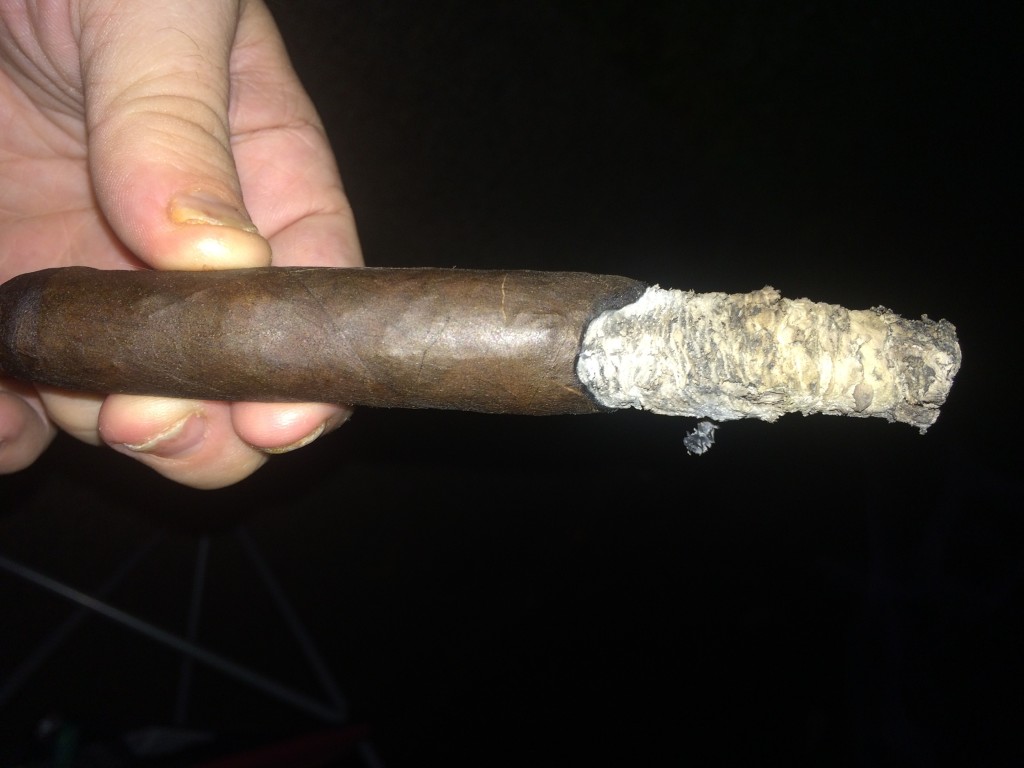 Closing: This is one of the first cigars I bought a box of.  It is fairly unique in its place as being all maduro. it offers a lot of flavor without being over bearing. I like it as a fairly affordable smoke when you want some pretty strong flavors. You do have to deal with some issues on the burn but overall it a cigar that I recommend.