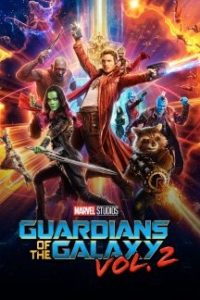 Writers: James Gunn, Dan Abnett (and 9 other creators of the characters and the comic series)

In 2014, Guardians of the Galaxy was a surprise hit and a major feather in the cap of Marvel, who somehow knocked it out of the proverbial park with an offbeat space opera starring a talking raccoon and a walking tree. Even as a Marvel fan, I was skeptical of the premise on the big screen back then. Fast forward to 2017, and we are deep into “Phase 3” of the Marvel universe and Guardians of the Galaxy Vol. 2, represents a major tent pole of the expanding franchise. Guardians Vol. 2 delivers on the humor and tone of the first but continues to prove Marvel’s struggle to develop engaging bad guys.

All of our heroes are back again for round 2 and, as the story opens, we join them on a mission to keep batteries out of the hands of some bad guys. They keep the cargo safe, but Rocket has sticky fingers and the companions end up the object of some aggressive negative customer feedback, for stealing the items they were just paid for protecting. When our heroes seem to be at the end of the line, a would-be savior appears, Ego (Kurt Russell), who claims to be Star Lord’s father.

The humor and tone, that made the first GotG so successful, still shines through in Vol. 2 and Baby Groot sends the cute factor through the roof. The complaint the sophomore effort garners comes from the same place as most of Marvel’s movie efforts, the development of a truly satisfying evil entity. GotG Vol. 2 is well over two hours long, but as I looked at my watch and realized I was an hour and 15 minutes in, the main bad guy was not yet fully revealed.

Now it isn’t a leap to figure out that the family picture being painted isn’t perfect, but the lack of antagonist motive development and the missing sense of dread fostered by infamous bad guys represents a missed opportunity for Marvel to flip the script. Despite this, Guardians of the Galaxy Vol. 2 is still a great entry into the growing Marvel canon and one that plays extremely well with family members of all ages.