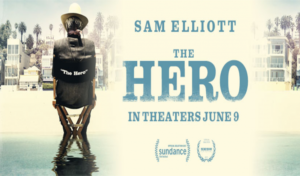 The Hero boasts a fantastic cast and a striking story that delves into the life of an aging actor, Lee Hayden (Sam Elliott). Lee lives alone and though he lives comfortably, he does so without the active career of his youth. His agent’s only offer is the acceptance of a lifetime achievement award by the Western Appreciation Guild.

While visiting his stoner buddy, Jeremy (Nick Offerman), Lee’s future intersects with a young female comic, Charlotte (Laura Prepon). The chemistry between them was both immediate and, perhaps, a little creepy given their age difference. Lee takes Charlotte to the award ceremony and during his substance enhanced speech (compliments of Charlotte), he creates a youtube and social media sensation, relaunching his career. Not all is golden though, as a terminal form of cancer diagnosis and an estranged daughter, Lucy (Krysten Ritter- Jessica Jones), demand focus and resolution.

Sam Elliot’s distinctive mustache, southern draw, and deep resonating voice make him an archetype for the western film world. His real life career, unfortunately, has had fewer opportunities as a result, so seeing him as Lee Hayden, a man whose fame was established in a western movie 40 years in the past is not hard to imagine. The themes of this movie are remarkably similar to another aging actor film, Dog Years (starring Burt Reynolds), though the tone is very different. In The Hero, we never see Lee in his youth, nor does he seem so forlorn. The portrayals are much closer to realism (as long as you can accept the stunning Laura Prepon falling for a man more than twice her age). The recurring theme of the ocean appearing in his dreams hints at the relentlessness of time and establishes it as his inescapable enemy. I can’t help but give a nod to two poignant and relevant poems from Edna St. Vincent Millay that are worked into the film in a satisfying way.

Director, Brett Haley, was present for the screening at the Montclair Film Festival and he summed it up pretty well before the screening, “If you are a fan of Sam Elliot then you are going to love this movie if not, there is the door.”