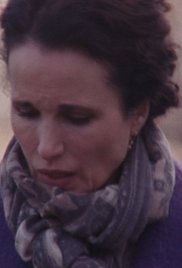 This movie had its world premier at the 2017 Tribeca Film Festival with Russell Harbaugh and Andie MacDowell on hand, among others, for a post-screening Q&A. Love after Love is Russell Harbaugh’s directorial début and, in comments before the screening, he notes his intention for the movie to have an emotional effect on you. Overall, he was pretty successful with an unusual style that does a great job of mimicking the relentless passage of time and showing how messy people have to become to heal after loss.

Suzanne (Andie MacDowell) and Nicholas (Chris O’ Dowd) open the film quietly while exploring the nature of happiness. This pause at the beginning of the movie sets the scene for the frenetic pace of storytelling that is about to unfold. We soon see the patriarch of the family and writer of some note, Glen (Gareth Williams), at a well-attended family dinner.  His speech seems off and he notes that his throat doesn’t hurt, though it sounds bad. We are quickly whisked to a bedside scene where the same family members attend Glen, who is obviously dying of an unspecified neuromuscular disorder.

Harbaugh makes a brave entry into the world of film direction with a movie that does not rely on classic storytelling or exposition.  A lot of faith is put in the audience to follow the story through various scenes of differing emotional clarity. Sometimes it is just a look from Suzanne that reflects her thoughts on the conduct of her son. At other times, you are thrown headlong into a scene of consequence only hinted at before.

The center of the success of this movie depended on MacDowell’s ability to suggest nuance and show a woman who is fumbling to find her existence after the loss of her husband. Nicholas has an equal focus in the movie as we see his poor choices play out in his relationships and work life.  Both carry out the task at hand and Harbaugh deserves a lot of credit for such an ambitious first feature.

At the time of this writing, this movie does not have a buyer, though gauging the films strength, one should be imminent.