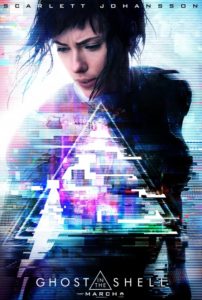 Okay, before I begin this review, I need to confess…I knew nothing about Ghost in the Shell in its anime incarnation prior to this movie (the original manga written by Masamune Shirow with the anime showing up in 1995). My review, therefore, can only assess the movie at face value. And since we are talking about faces, let’s start with the lovely Scarlett Johansson who plays the lead “Major”. Her casting created a whitewashing uproar since the source material calls for an Asian lead, and it does seem odd that she is one of the only caucasian people in an obviously far east setting. Late in the movie, we find a flimsy reason for this, but I’ll leave it there for you to discover.

The opening of the movie has an android building experiment sequence taking place. In it, Major’s (Johansson) human brain is fused with an entirely fabricated body. The result looks like a barbie doll body with Scarlett’s face. Every time she goes to fight mode this is also the way she looks. It is about as close as you can get to having her fight in the nude without committing fully. Apparently, Major’s brain was saved when her parents and family were killed as refugees by terrorists. With her enhanced body and human mind, she is an ideal agent for a counter terrorist group, Section 9, led by Amaraki (Takeshi Kitano). In a stylistic onslaught, Major thwarts an attack on Hanka Robotics (her creators) business conference by robotic geishas. She attempts to hack into one of the geishas to discover the origins of the attack and is nearly hacked into herself.  You can clearly see by this early narrative, a lot of cyber witchcraft takes place.

Unfortunately, this asset is never fully explored. The world, though highly infused with generically Asian esthetic, fails to capitalize on the concept and possibilities of a world where artificial enhancements are commonplace. That being said, the movie kept me interested. I know that the source material is supposed to explore more profound concepts. However this is a fun romp with retread concepts of evil corporations and the abhorrent nature of technology.  Oh did I mention, Scarlett Johansson epitomizes loveliness?