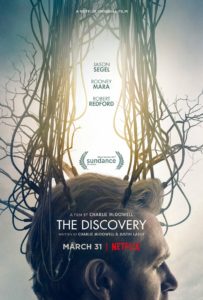 Charlie McDowell directs his second feature film with a stellar cast and poses an answer to the ultimate question of life…what comes next? The potency of the question possesses a riveting character that offers a myriad of potential treatments. McDowell and cowriter Justin Lader choose to sidestep the trappings of a theological discussion, focusing on the scientific conundrum inherent and ground level science resulting in realistic consequences.

Another direct to Netflix original, The Discovery, opens with a melancholy and deserted ferry porting Will (Segel) and Isla (Mara) to a rainy and equally lonely dock. A blaring TV serves as the backdrop to a chance encounter, with news coverage recounting the number of suicides in the year and a half that has transpired since it was proven that there is an afterlife.

Awkwardly, and with that innate spark that indicates a future attachment, Will engages Isla with discussions of suicide and the state of the world. After an apparent permanent parting on the dock, Will is picked up by his brother, Toby (Plemons), and taken to a secluded estate that looks a lot like a cult compound.  We learn that Will’s father, Thomas (Redford) is the man responsible for proving that there is an afterlife. We also learn that Will had a large hand in this discovery and that due to an incident involving his mother, Will left to live a life as a neurosurgeon.

The movie possesses a multilayered narrative, with several parallel and disparate mysteries that resolve together with the reveal of the story. Jason Segel and Rooney Mara have terrific chemistry, reminiscent of the leads in Eternal Sunshine of a Spotless Mind. Robert Redford plays a man haunted by his past and his impact on the world, seeking an element of redemption in light of the consequences of his scientific breakthroughs.

This movie will leave you with a lot to think on. I found it to be wholly engaging and worth the time spent.