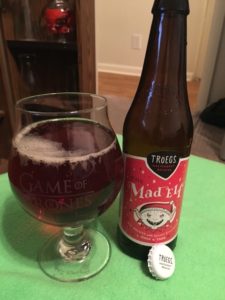 We have just washed down the last few Halloween candies with our attack of the Pumpkin beers and Christmas Ales are already on the shelves.  The Mad Elf is a seasonal offering of an unusual variety, relying on subtle, cherries, chocolate, honey, and Belgian yeast to create a complex and potent ale.

Appearance: Very clear brownish red that fizzed and bubbled for a while like a soda when it was poured into the glass.  After a few minutes, the head diminished though there were champagne-esque bubbles throughout.  Nothing wrong here…looks crisp. 6/6

Smell: Tart cherries dominate, with some slight Belgian yeast funkiness.  Pretty much what you would expect with the ingredient profile.  24/24

Taste:  With all that cherry flavor you expect this ale to hit your mouth tartly.  This beer doesn’t rely on that, however.  The cherry flavor is mellow and blends with a very muted Christmas spice taste that is probably the result of the yeast character as much as anything else.  The honey addition is present in the strength of the beer which is slightly warming but this beer covers the 11% abv very well.  35/40

Mouthfeel:  A lot of carbonation with crisp mouth action.  The flavor has a lingering effect that makes it feel thicker than it is.  9/10

Overall:  Well I am of two moods.  Initially, I wanted to ding this beer because it didn’t deliver the tartness my taste buds crave when they hear the word cherry as a beer ingredient.  However, as I made my way through this tasty offering I began to appreciate the subtlety. One of my beer buddies has indicated that they make another version of this that is aged and comes in a corked bottle.  I am intrigued by it and will be on the lookout.  I recommend this brew.  Quite good. 20/20